First Capital said in a research note that the sudden increase in the market liquidity towards the latter part of the month and renewed foreign and local buying interest resulted in yields dipping by 10-25bps specifically in the 2 year to 15 year bonds.

“Amidst the increasing activity, some selling pressure was observed during the last week of the month creating an overall net foreign outflow of 0.42 billion rupees in March 2017.”

“In spite of mid-long tenure yields dipping, a jump in the short tenure was observed.”

During the year up to 12 April 2017, Sri Lanka rupee has depreciated against the US dollar by 1.2 percent.

First Capital Holdings further highlighted that the money market continued to stay in deficit due to heavy foreign debt repayments. 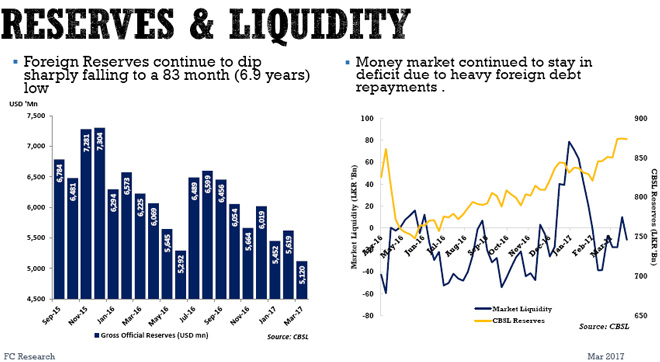 The comments on this report are provided by the Capital Markets Research Unit of First Capital Holdings PLC an investment bank in Sri Lanka.